The Town of Oliver, with its rich agricultural history and internationally recognized wineries, is located in the heart of the South Okanagan.  Oliver is Canada’s Wine Capital.

From the U.S.-Canadian border to Salmon Arm at the northern extreme, the Okanagan stretches over 200 km, yet averages only 15 km. wide for most of that distance. The South Okanagan area falls within the jurisdiction of the Regional District of Okanagan Similkameen, (RDOS), which includes the Town of Oliver and surrounding rural area.

The Columbia and Cascade mountain ranges in south-central B.C. surround the valley with elevations exceeding 2,100 m (7,000 feet) above sea level. The Okanagan’s landscape is made up of series of terraces and oblong lakes which were formed by glacial activity during the Tertiary and Pleistocene eras. The final retreat of the ice (between 11,000 and 9,000 years ago) left large deposits of gravel, silt, clay and sand on the bottom and sides of the valley floor.

It is estimated there are now over a quarter of a million people living in the Okanagan. The area has become a prime residential and small business relocation area due to the gentle climate, excellent transportation and the availability of world class recreational opportunities. The Okanagan offers business and investment opportunities in a location and environment which is second to none.

The purpose of the project is to create a national mural including all provinces and territories, 100,000’s of paintings and 150 individual murals that when united will form one gigantic mural mosaic. The mural, if ever connected would be over 365 meters wide (4 football fields) x 2.5 meters high (8 feet).

The mural will represent a cultural mosaic, a time capsule, a visual portrayal of history, an art masterpiece from the soul of the nation. An art piece that fifty years from now, may inspire another generation, who will in turn be able to celebrate through the mural, and maybe take it upon themselves to add to this memory. 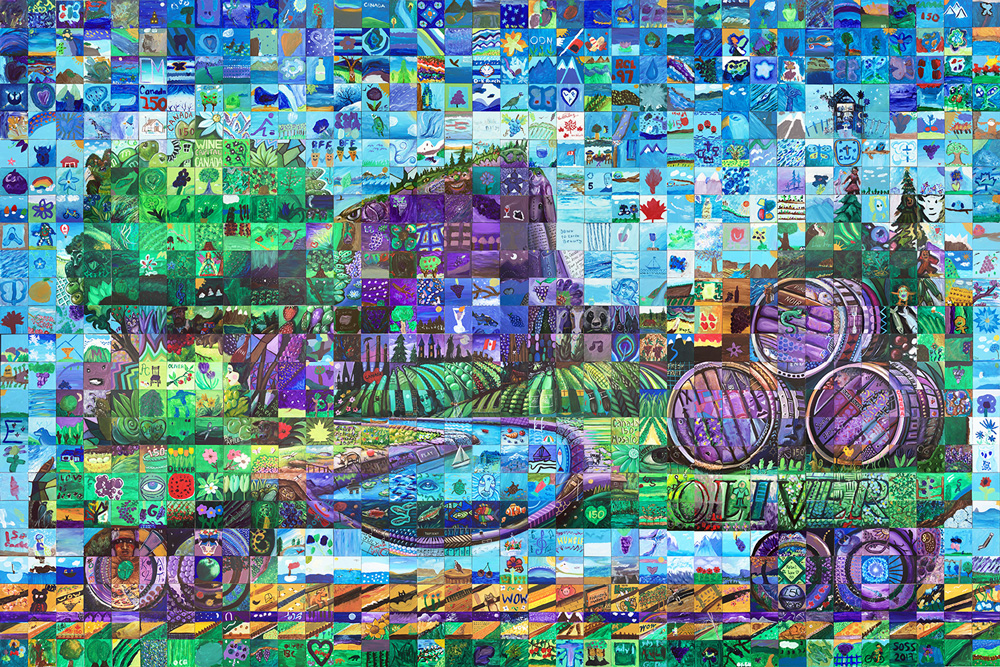 Oliver was granted its coat of arms and flag by the Chief Herald of Canada in 1994. They are a unique expression of the Town of Oliver’s natural and historic heritage.

This is centred on the central facets of Oliver’s geography and history. The green represents the land brought to life by the waters of the South Okanagan Irrigation Project, the wavy blue on gold symbolizing the great channel running across the gold of the dry lands. The sun represents the other essential ingredient in growth as well as a vital element in Oliver’s quality of life.

The apple and horseshoe motif recalls one of the Town’s earlier emblems, honouring the first orchards and the horsepower which was central to early agriculture and transport. The miner’s pick and shovel recall the mining activities in the nearby hills that immediately preceded establishment of the present townsite.

Crest (above the shield)

Rising up out of the coronet, is the head of a Salish woman, in profile. She wears a special crown composed of a gold circle set with two eagle wings each coloured, diagonally, gold and red.

In Canadian municipal heraldry, while helmets and the cloth mantling protecting them are derived directly from the medieval knight’s helmet, the original support for the crest, they can symbolize the determination of citizens to safeguard the community and its resources.

The foundation element of the Oliver crest is the mural coronet, the traditional heraldic symbol for a municipality. Here it is made distinctive to Oliver by colouring the stones gold and setting a frieze of grape leaves around the centre of the crown.

The grape leaves symbolize the newest major product of the region and the continuing prosperity flowing from irrigation.

The head of the Salish woman has several meanings; it refers to the other name of McIntyre Bluff, and honours Oliver’s natural heritage, and the Salish First Peoples, and their Valley homeland. The red and gold eagle wings in her coronet are taken from a key element in the Scottish coat of arms for McIntyre and therefore honour Peter McIntyre, namesake of the Bluff and first orchardist near Oliver.

The Compartment on which the shield rests and the Supporters sand consists of a section of local fields as they would have appeared before irrigation, set with sage plants in natural colours. Below the fields are stylized wavy bands of blue and white representing the waters of the irrigation project.

On the left side is a California big horn sheep with a body in gold and horns and antlers of green. In heraldry, wherever it is possible, animals should be granted in pure heraldic colours, in this case drawn from the main colours of the shield. Around the sheep’s neck is a collar made of the Okanagan Tartan. On the right side is a gold mare with a mane and hooves of green wearing a similar collar.

The sheep symbolizes Oliver’s special natural setting with the mare honouring the early pioneers. The Okanagan tartan collars make them distinctive, in heraldry, to Oliver, and also refer to domestic arts and the ingenuity of citizens in terms of shaping the community.

“Borne of the Waters Blest by the Sun” is a motto combining a salute to Oliver’s beginnings and one of its greatest attractions, the sunny climate.

The field is blue. Across the horizontal centre line is a wavy band of gold. In the centre, on the band is a large gold circle and on it a smaller blue circle. In the centre of the blue circle is a sixteen rayed sun. The flag blends the imagery of the water with the sun and the central “O” for Oliver.

What do a one-armed gold miner, an honest politician, the world’s largest cherry pie and some of the best wines in the world have in common? Oliver, BC.

Aboriginal people occupied the territory in which Oliver lies when settlement by Europeans began in the 19th century. Osoyoos Indian Reserve No. 1 stretches from Gallagher Lake area to Osoyoos and adjoins the Town’s eastern boundary.

The Inkameep Indians, sometimes called the Osoyoos Band, migrated here and settled on the east side of Osoyoos Lake. The tribe’s name comes from a phrase which means “the base of bottom” – attesting to their residence on low lands and plateaus.

The first European activity in the area was gold mining, with the staking of the first claim in 1887, and the establishment of the Town of Fairview in 1890 on the benches above Oliver to the west. Folklore has it that a one armed gold prospector named Reid discovered gold in this area, and the Town of Fairview (located just outside what is now known as Oliver) became home to gold miners, ranchers and businessmen. Fairview was one of B.C.’s largest towns at the turn of the century. The gold rush died and sadly, so did Fairview, with Oliver springing up in its wake.

Fairview’s life was short; the post office was closed in 1926. One of the few remaining buildings from the town, the Fairview Jail, has been moved to the Oliver museum site.

Following the First World War, BC’s premier, known as “Honest” John Oliver, envisioned an irrigation canal, which would bring this dry Sonora Desert region to life. The South Okanagan Lands Project was born, creating jobs and long term opportunities for veterans returning from World War I. The original townsite of Oliver was surveyed in 1921. Completed in 1923, the concrete irrigation canal (locally known as “the ditch”) soon transformed this desert region into lush orchards and farms.

The airport, built just prior to the Second World War, initially served the entire region south of Penticton.

Oliver, along with Osoyoos to the south, experienced rapid growth after the Second World War, with an influx of agricultural settlers, including many of Portuguese and German origin.

Home to 11 local wineries and many vineyards, Oliver now calls itself “The Capital of Wine Country”. The Festival of the Grape is fast becoming a ‘must attend’ during the Okanagan’s Fall Wine Festival.

A thumbnail history of Oliver is presented below.

People and Population and Projected Growth

The Town of Oliver’s population was 4,928 in 2016 (Statistics Canada), with an additional 3,557 people living in the surrounding rural areas (Electoral Area “C”).

Search for services, info and more…